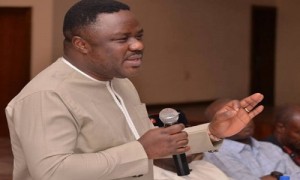 Cross Rivers state governor, Ben Ayade, has shared that he employed over 8 000 people into his cabinet during his first term in office simply because he wants everybody from every part of the state to have a feel of his administration.

Ben Ayade who spoke in Calabar during a function organized for the commencement of his second term further said that the move is in line with the resolution of his administration to ensure that at least a member from every family is represented in his government to earn a salary.