Veteran rapper, Eldee has come under criticisms since he spoke up against those involved in Internet fraud popularly known as Yahoo Yahoo.

The rapper on Saturday condemned the act, pointing out that it cannot be justified despite numerous attempts to justify and also equated those involved in it to armed robbers.

This did not go down well with a lot of people who came across his page, Eldee even shared a DM telling him to shut up by a troll because he does not live in Nigeria.

Also Read: Nigerians Throw Mud At Regina Daniels, Say Her Boobs Has Fallen After She Share These Photos

The rapper has now made a shocking revelation that since he condemned the act of Yahoo boys, he has received numerous death threats. 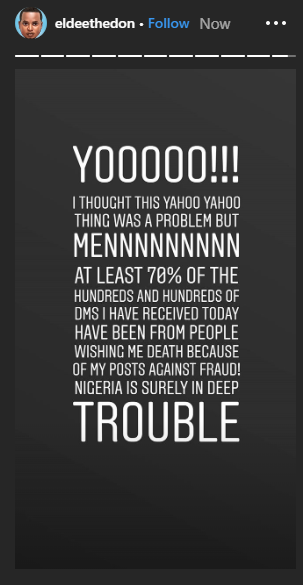