Home Metro News 11-Year-Old Boy In Pains And Tears As He Explains How His Right...
Facebook
Twitter
WhatsApp

An 11-year-old boy identified as Goodluck Amaechi goes through excruciating pain as he explains the injustice done to his hand by the 61-year-old man who cut off his right hand on the allegation of stealing from his pond. 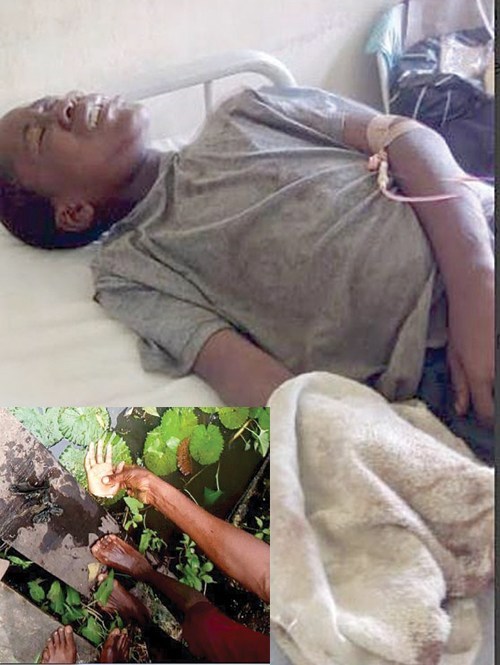 Recall that a 61-year-old man alleged that one 11-year-old boy was attempting to steal fish from his pond before he chopped off his wrist.

The young boy who is in the hospital going through excruciating pain as he explained what really happened to newsmen, he said with a teary eye;

“ He doesn’t even have a pond. What actually happened was that my friends and I were playing within the community when we decided to fish in the canal beside the man’s fence. I placed my right hand on the wall and was pointing at a fish for my friend to catch when some hard object landed on my hand. As I turned around, I discovered that my hand had been cut off by his cutlass. Blood started gushing out. Immediately,  he took the fallen wrist and ran away. I began to scream for help. “As I was shouting, people gathered but they were scared to help because of the blood that was gushing out of my hand. Rather than help me,  they were using their phones to video the incident, until a man who was riding a bike came and used a hand towel to wrap my hand.  One of our neighbors,  mummy Esther, took me to the hospital”…

His  father a 47-years-old widower explains ;

“ I received a distress call from one of my in-laws that my first son was sick. Immediately, I rushed to the house to meet people gathered, wearing sad looks. I didn’t see any of my children.  I went straight into my one-room apartment, only to be informed that a man on the next street had cut off my son’s hand and that my son had been admitted at Igando general hospital, Jeremiah Obifor, an elderly man who has children, has made my son handicap. For four days my son has not been able to sleep because of the pains. Since I lost my wife about four years ago, I have been struggling to provide for my kids, with the little salary  I earn”

It was also gathered that there was no pond sited at the bungalow of the suspect on 14 Isha Ibrahim street. Rather, a swampy land next to his building where fishes settled whenever it rained.