According to reports, a prophet identified as Jacob Ade Farinmade, the head of Celestial Church of Christ, Gospel Mission, Mosan, Ipaja, Lagos, has been taken into police custody for secretly burying a young lady he impregnated. 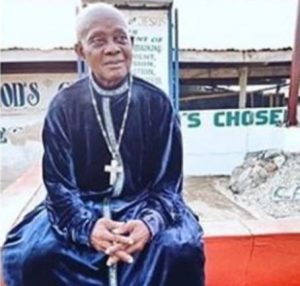 Reports claim the young lady named Bunmi lost her life during childbirth and the suspect buried her without even informing her parents about her demise.

Before her demise, Bummi was allegedly  taken by her father to stay with her mother after she was rusticated in 200 level at Babcock University in 2014.

However, Bunmi’s mother, Derayo Omisipi, thereafter sought help for her daughter in the hands of Farinmade. She took her daughter to his church for spiritual deliverance and protection.

According to a report by TheNation, the cleric, who is already married to more than 10 wives, wasted no time in taking advantage of Bunmi’s state as he lured and impregnated her.

It was later gathered that the prophet refused to let the deceased go for any antenatal clinic throughout the duration of her pregnancy.

The cleric only announced the news of her death to her mother after he had laid her to rest in a shallow grave close to the church premises.

This didn’t sit well with the deceased father as he became curious to know what had happened to his daughter after her mother could not offer a valid explanation about her whereabouts.

He then informed the police about the matter which led to the arrest of the prophet.