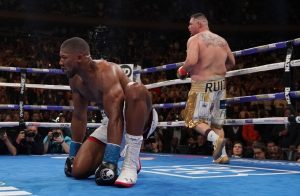 ALSO READ: BBNaija Cee-C Gets A Mercedes Benz As She Bags Another Endorsement Deal

He claimed the British professional boxer is not good at boxing and he is sure that he will win again.

Ruiz took the world by storm when he defeated Joshua and won the IBF, WBA and WBO titles on June 1st but sadly, he is under contract to take a rematch.

Speaking in a new interview with BBC, Ruiz said,

“the rematch is going to be the same. I am going to be more prepared and more ready. I know his flaws. I can do a lot better. The only thing that he can do is just run around, he’s not good at boxing.”

Ruiz who was mocked for his physique also vowed to be in a better before the return to the ring the second time.