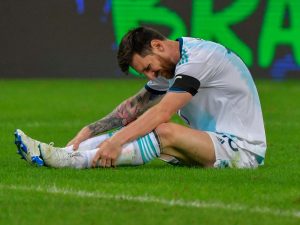 Argentina was held to a 1-1-draw by Paraguay during their second group stage match of the ongoing COPA America tournament. Five times Ballon d’Or winner, Lionel Messi, was only able to rescue a point for his side from the spot-kick after Paraguay took the lead in the first half.

As it stands, Paraguay now sits in second on two points while Argentina is third on the log with a match each remaining to end the group stage.

Argentina’s hope of making it to the next round rests on Columbia(1st position) beating or playing a draw with Paraguay while Argentina needs to avoid a draw or defeat against Qatar in the last match to make it as second in the group.

Consequently, reactions have trailed his performance during the encounter.

Lionel Messi: “We are in a complicated situation because the win against Paraguay was fundamental. Only Cristiano Ronaldo can save us from this mess now” [via md] pic.twitter.com/LWAp9mIOrm

So you’re telling me Messi the ‘best player ever’ needs a barcelona team just to beat paraguay?!?!?!?!!?!? pic.twitter.com/TcCkBu3Vla

Messi: Dear Ronaldo how do you do it? How do you manage to carry Portugal all by yourself?

This weight is too heavy for me.

Paraguay was too tough for Argentina

My teammates didn’t even help me

He couldn’t lead his team to win Paraguay and secure a sure spot.

They’ve been lowered to the point they have to “beat” Qatar to stand a chance.

I even heard someone saying Messi is still the GOAT.

He’s not even qualified to be a FOWL 🐓 #CopaAmerica #ARGPAR pic.twitter.com/EqmlbYfVpL