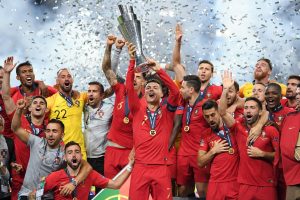 Reigning European champions, Portugal, has won the maiden edition of the UEFA Nations League after a solitary goal from Valencia winger, Guedes, proved to the match-winner during the keenly contested match against the Netherlands today.

The defensive duo of Virgil Van Dijk and Matthijs de Ligt kept an eye on five times Ballon d’Or winner, Cristiano Ronaldo, as they reduced his influence on proceedings but the European Champions had other ideas.

Guedes struck the ball from the outside of the penalty area with so much venom that the Dutch goalkeeper was left scrambling and couldn’t get a hand to his shot.

Cristiano Ronaldo has now almost won it all with just the World Cup trophy eluding him.