British dance-hall singer and rapper, Stefflon Don has replied a Nigerian Lady who advised her to stop posting Burna boy’s picture in a rather subtle and mature way. 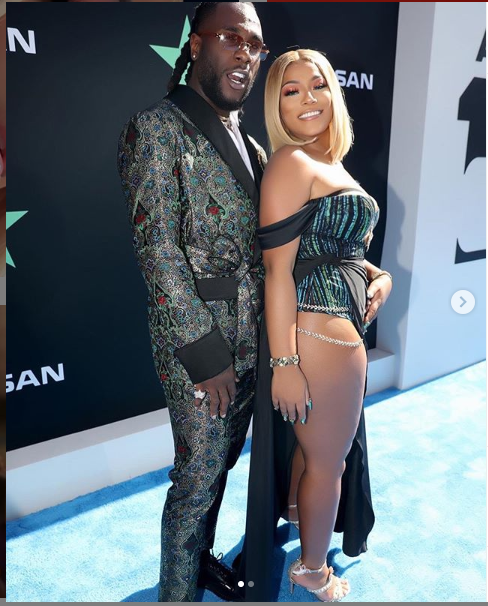 The British rapper and Burna Boy who is having a romantic relationship have not failed to flaunt their relationship life on social media.

Burna Boy who recently announced he will be quitting his social media page for his management has yet to post any picture of Stefflon Don on his Instagram page, however, they are videos and pictures surfacing the internet with both of them having a good time.

Stefflon Don took to her Instagram page to celebrate her Boyfriend, Burna Boy when he won the BET Awards as some Nigerians reacted to it, saying she looks desperate for the Nigerian Afro-pop superstar.

The Lady identified as @nekah.oxox wrote’ “Your photos should be flaunted all over the internet by Burna Boy  You were one of the top 5 best dressed ladies at the BET awards. He’s not posting your photos, he’s not in your comments right now rolling all over you.

“You’ve been supportive from the onset, always promoting his music. I don’t see him do the same for you. You might say you don’t mind but fam, you’re a goddess and should be showcased.

“This is social media era. If that dude aint flaunting you pon the internet… THROWAY AM!!!.”

Thank you hun but he’s the sweetest person. He is not handling his Instagram, who ever is, just wants it to be business and i’m okay with that. If you want to see us, come to my page.” 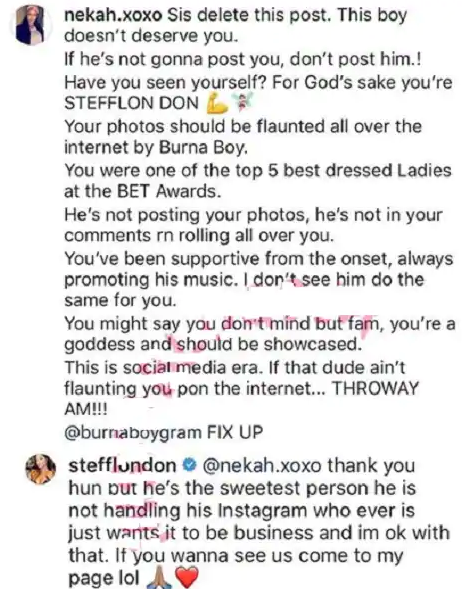