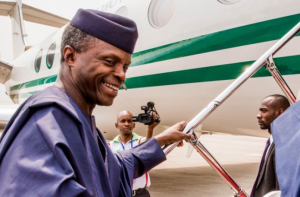 Professor Yemi Osinbajo, the vice president of Nigeria has shared that being a good father goes beyond just bringing a child into the World.

According to the vice-president who made this known while fielding questions from journalists shortly after celebrating the 2019 father’s day at the Aso Villa Chapel, Abuja, he said to be a good father, one must have the courage to raise one.

“It is not the ability to father a child; the ability to have a child that makes you a father; it is the courage to bring up one; ability to raise one. That’s what really makes you a father and I think the responsibilities of fatherhood are so many; whether one is a biological father or whether you are one who wants to take care of other children. I think that all of us, as men, have a role to play in the life of so many, not just our biological children but so many of them who have no fathers. Even to some who have fathers too, who we have a responsibility to set an example to so as to lead an exemplary life, to bring them up as the scripture says in the way of the Lord.”