A sad day for the traders of Makurdi market, Benue state as fire razes over 100 shops and destroyed goods worth millions of naira on Tuesday 18th of June 2019. 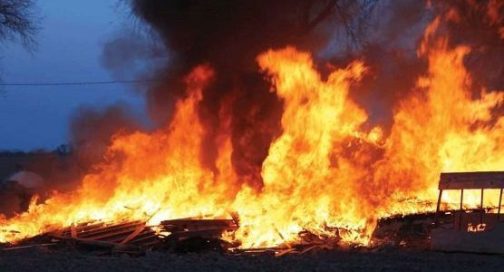 ALSO READ: Rufus Giwa Polytechnic Shuts Down School Until Further Notice
According to reports, the inferno started around 6:30 pm and burnt for at least 2hours, burning over 600 lockup shops, open stalls housing grains, fish products among others.
The spokesman of Benue state government, Terver Akase has however confirmed that there have not been any record of casualties.

The market was built by former Governor, Gabriel Suswam to unclog the Makurdi city centre and ensure easy trading.

The market also served as a temporary shelter for victims of the devastating flood in 2017 and residents who fled their villages at the height of violence by herdsmen between late 2017 and early 2018.