Social commentator, Reno Omokri has taken to his social media page to discuss some things about getting married. 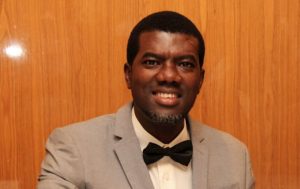 MARRIAGE according to The Bible. Step 1: Man approaches Woman Step 2: Man proposes marriage to Woman Step 3: Woman accepts proposal Step 4: They both tell their parents End of process! Every other thing, including CHURCH & REGISTRY is MAN MADE!