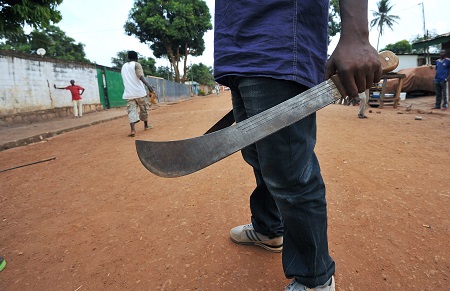 The people of Ilasa-Ekiti in Ekiti East were yesterday thrown into confusion after an unidentified herdsman beheaded his girlfriend with Cutlass.

The deceased lady, who is reportedly of the same tribe with the suspect, was attacked beside a stream where she had gone to fetch water with her younger sister.

The suspect had ambushed the deceased, grabbed her from behind, chopped off her head while she bent down to collect some water from the stream.

The suspected reportedly took off committing the heinous crime, but was later nabbed by the police, from the information given by the younger sister of the deceased.

The traditional rulers of the community the Alasa of Ilasa, Oba Ajayi Omolagba including other residents of the community revealed that the deceased had been allegedly betrothed to the suspect as his future wife while she was still a teenager in line with their custom and tradition.

It was said that the suspect started having issues with the deceased last month when he asked that she spends the Eld-el-Fitr celebration with him but her family refused.

This annoyed the suspect, which is presumed to have led to the act.

The Ekiti State Police Public Relations Officer, Caleb Ikechukwu, confirmed the incident saying that investigation has been launched to get to the root of the matter.