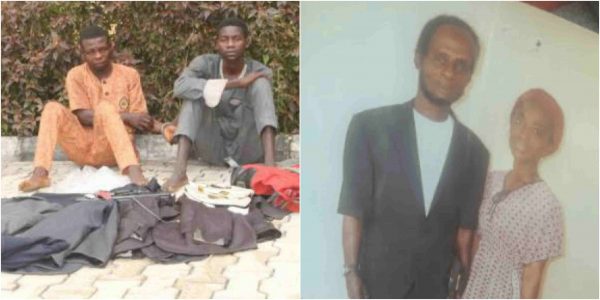 The Nigerian police force has arrested security guards identified as Ayuba Idris and Taisu Abubakar for allegedly murdering their Ghanaian boss and his daughter over unpaid salary in Ondo State.

The victim Kwakye Kwaku Richard, aged 71 years and his daughter Kwakye Tope aged 27were said to have been killed and buried in a shallow grave.

The state Commissioner of Police, Mr. Undie Adie while confirming the sad incident added that both suspects had been arrested by his men, Sun News reports.

Mr Adie said a certain Mr. Ojo Adegbusuyi reported the incident to the state police command, after which his men arrested them.

Continuing, the police boss said the murderers were guards at the home of the deceased located at Olu Foam area along Ilesha-Owo expressway in Akure.

One of the suspects Ayuba Idris aged 20 years was arrested in Kano State on May 16, 2019, according to Mr Adie.

The deceased’s suits were recovered from him, and during investigation confessed to have murdered his boss revealing he did it with his partner Taisu Abubakar.

The suspects after the confession led detectives to a building at Ojomo Akintan Estate, Olu Foam where the remains of the man and his daughter were recovered.

On May 28, 2019,  Taisu Abubakar the other suspect was arrested in Sokoto State and one of the deceased’s laptop computers and some clothes were recovered from him.

Further interrogation revealed they killed the victims due to his refusal to pay their three months’ salary arrears adding that they killed the daughter as well because she saw them the day they killed her father.

Mr. Adie, went on to say that the suspects will be charged to court on completion of their investigation.