Nigerian singer, Harrysong has joined the growing list of Nigerians who have called out American DJs who said nobody knows Wizkid.

According to the DJs during the show, they expressed that if not for Drake’s collaboration with the Starboy act, he won’t be known at all.

Reacting to this, Harrysong showed support for his countryman and he also urged Nigerians to fish out the people who made the comments.

first of all….. i dont know who the fuck this oyinbo albaino is, saying there’s no star of afro beats; your fathers and your presidents know the great fela Anikulakpo kuti , and still respect him till date, wizkid, Davido ,burna boy, 2face idibia, and many more Don’t need Sean Paul or drake to be known as star as they are…. you Americans should respect our sound and culture(AFRICA), 💪 I CAN’T STAND DISRESPECT. I SUPPORT PEOPLE; NOT PARTY #africa #respect #afrobeatz#culture #kingmaker#HarrysongInspireMonday …pls let’s fish out this guy’s social media handle and correct his upbringing👊 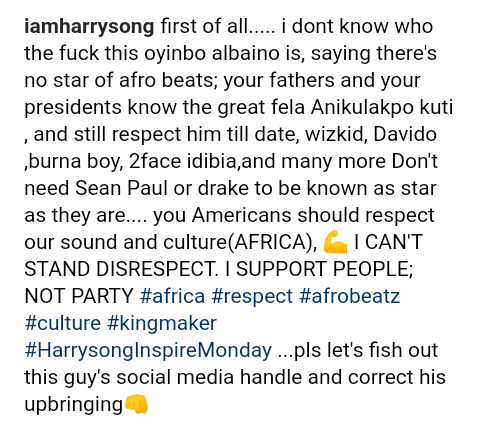