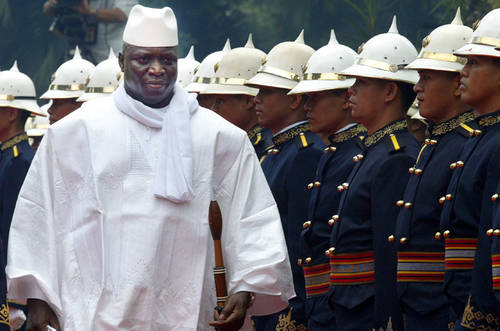 Gambian former beauty queen Fatou Jallow, 23, has revealed to BBC that she was sodomized by Yaya Jammeh, Gambia’s former President.

Jammeh was recently ousted by fellow leaders in the Economic Community Of West African States (ECOWAS), in January 2017, after spending 22 years in power.

According to Jallow, the then president had slapped her, injected her with a needle, before,

“He rubbed his genitals in my face, pushed me down to my knees, pulled my dress up and sodomized me.”

Jallow continued saying she was tempered into the act as she had earlier rejected a marriage proposal from him. She continued saying her ordeal started after she won a beauty pageant in Banjul, the country’s capital at the age of 18 in 2014.

She recounted that Jammeh acted like he cared in the months that followed giving her gifts and money, as well as getting running water installed in her family home.

Jallow said Jammeh asked her to marry him during a dinner organized by an aide of the president, but she refused.

In June 2015, the said aid asked that she attends a religious ceremony at State House in her role as a beauty queen.

Jallow said she was taken to Jammeh’s residence.  “It was clear what this was going to be.”

“I’ve really tried to hide the story and erase it and make sure it’s not part of me.

“Realistically I couldn’t so I decided to speak now because it is time to tell the story and to make sure that Yaya Jammeh hears what he has done.” She said she also wanted to testify before The Gambia’s Truth, Reconciliation and Reparations Commission (TRRC), which has been set up by President Adama Barrow, who won elections in December 2016, The BBC reports.

“We as a party and The Gambian people are tired of the steady stream of unfounded allegations that have been reported against our ex-president,” Rambo Jatta Ousman, Deputy Leader of Jammeh’s Alliance for Patriotic Reorientation and Construction (APRC, said in a written statement to the BBC in denial ofJallow’s claims.

“The ex-president has no time to react to lies and smear campaigns. He is a very respectable God-fearing and pious leader who has nothing but respect for our Gambian women.”

A former official who worked in the Gambian government confirmed he saw Jallow at ‘odd hours’. He added that there were protocol staff,  mainly women ready to fulfil Jammeh’s fantasies.

The Human Rights Watch and Trial international also affirmed this saying Jammeh had a system in place to abuse women. They revealed that some of these women placed on the state payroll and worked at State House as so-called “protocol girls”.