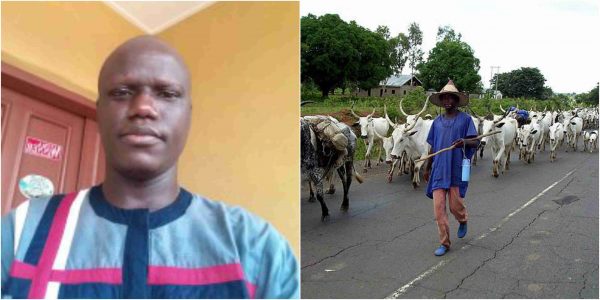 A Nigerian journalist simply known as Adenrele has recounted how he and a=others were rescued from kidnappers den in Ondo state by some Fulani herdsmen.

The journalist took to social media to share his experience saying he was travelling along the Owo-Ifon Road in the state when they ambushed by some hefty men who didn’t in any way look like herdsmen.

Read the rest of the story below;

Let me share a kidnap story we experienced two days ago in Ondo state. Listen folks, I don’t know about other stories making round the news about herdsmen kidnapping people on the highway, but they’re certainly not herdsmen.

This personally happened two days ago along Owo-Ifon express way in Ondo state, we headed for this journey as early as 7am, on getting to Ipele junction of that same axis after Elegbeka(for those conversant with that route) at a pothole a group of hefty men numbering about 4

Came from the bush, threw some woods on the road before the pothole stopped us and ordered the four of us in our car. May I chip in this,my uncle who was at the wheel already told us before we started the journey how the rate kidnapping is on the rise. Infact while on our journey

We listened to the news about a LG chairman or who was shot by herdsmen along Ikire in Osun state who was heading to Ibadan. Whenever we approached any pothole, he sped past without hesitating if the car was gonna break down or if the tire would burst.

But at this particular Spot, those hefty men already threw that wood so we won’t be able to go past it. They came out, pointed heavy guns at us, left our car at that spot, these men didn’t look like herdsmen, within me, I began to wonder if that would certainly be the end, a whole lot of thoughts ran Through my mind, one of them led us with a gun, the two were beside us at both sides, one behind us, all held on to their guns firmly, we walked through the bush path for like an hour without getting to any point where we were going to meet anyone.


We got to a stream, they stopped and one of them said he was pressed he was allowed to go defecate, we were left with 3 men. After walking that long, we were exhausted, we sat down with our hands tied to our legs, at this point no I was already saying my last prayers.

They asked us if we had anyone who was going to rescue us, don’t forget we’re yet to get to their “camp” as alleged, we sat by that stream. But luckily for us,I sighted a little boy who isn’t more than 10yrs old, looking tattered, on sighting this boy, he left and my mind skipped

The other guy who went to defecate came back and they cracked jokes, they untied us, at that point, they already collected our phones, but I had my other Android phone in the car. I couldn’t move at that point, they hit the gun on my butt. We came to a little hut.

Their leader was right there and 5 others were already kidnapped tied to trees. Mind you, I sighted a little boy at that stream, not knowing the little boy traced and followed us. After spending like 3hours with heavy torture at the hands of those criminals, that little boy came

At this point with 7 men herdsmen came with that little boy, they rescued us all. They were all speaking in their language either they were making incantations I wouldn’t say, they collected those guns and shot two men at the spot.

At this point I was literally in heaven I didn’t know when I urinated on my body, the others fled including their leader, they took their knives and cut those ropes. They led us through the bush path till we got to Oriohin one other village along that axis. We took a cab that brought us back to the spot where our car Was parked.


I just regained my sanity yesterday. I don’t know about other kidnap happening across the country, but ours wasn’t even herdsmen but hefty men who don’t look like herdsmen. As a matter of fact,herdsmen were those that rescued all of us.

We were actually heading to the village for Project. Those men rescued us without charging us a dime. They left their own hut with their cows and when we got to that village where we took a vehicle back to where our car was parked, my uncle gave them 20k from what he had on him as part of the project money.