Ibinabo Fibresima expressed that Ned Nwoko’s name should not be tarnished as he is a man of integrity.

The actress also lashed out at fellow actress for questioning Regina Daniels decision to get married to the lawmaker.

“I can stake everything on Prince Ned Nwoko’s integrity. I know him personally and so I can vouch for him. If he’s found happiness in Regina and she’s accepted to reciprocate, then I think it’s the height of hypocrisy and joblessness to interfere in their lives. Regina is my daughter, I love her and will always be there for her. Rita is my sister and I adore her as a dotting mother. Prince Ned is a big brother and I am deeply inspired by him.

She will not be the first in this scenario and will not be the last and I strongly detest her being made a victim of her success. Regina is not underaged, she is a full-fledged professional, an adult under the Nigerian law and is competent to make her own decisions. Majority of those crying blue murder and insulting Prince Ned Nwoko would sacrifice their families to be in Regina’s shoes. Finally, the girl doesn’t give two about your opinion, she made her choice and everyone is bound to respect the same.

I have known Regina since childhood and have never known a more humble, decent young lady given to high puritan values, discipline and family ethics. Indeed her mother Rita is an example of how a strong black African woman should be. Passionate about her children and willing to give her life to see them succeed along just lines. I never even heard about these bad belle Nigerians when Regina and her mother weathered the storm that is the Nigerian film industry.

I’ve listened to various comments, read the opinions, sometimes laced with vitriol and I’ve come to the conclusion that majority of Nigerians ascribe to themselves this pristine and Olympian moral standing which they believe gives them a divine right to judge others and poke their nose into what ordinarily is none of their business even when stinking skeletons are crying for air in their own wardrobes. How else can one explain the fact that a young adult girl’s marriage to a man she loves and has pledged to spend her life with has suddenly become a potent topic of national discourse. The angst people throw concerning this issue would make one believe Prince Ned Nwoko a gentleman in his own right kidnapped, defiled and further coerced ‘an underage’ Regina Daniels into a sham of a union.

I must say along the line I found most deplorable and downright disappointing the comment of my sister and friend Shan George Though she deleted it (of course she forgot the Internet and its complexities) I found her comment rude and frankly ill thought. A person of her stand who should know better going ahead on social media to call out Prince Ned as ‘disgusting and shameless’ for marrying a ‘child’ and even questioning what he’s done for his people is vindictive and vile. This is the same Prince Ned Munir Nwoko who has been a humanitarian philanthropist par excellence, a father to so many and is a man who has given his life to helping complete strangers all over the country, done so much for his community and Nigeria at large and is still doing so much in every sphere. Shan dear. No. You no try. He deserves an apology from you.

Please, these are questions and facts dearest Shan and our morally upright judges are seemingly oblivious to; Regina has worked extremely hard since childhood to attain her celebrity status and clout and doesn’t need a man to keep her comfortable or in the limelight. She met with Ned, saw something she loved about him and ‘agreed’ to marry him when he ‘proposed’ to her. She is not a side chic but a fully married woman. Once married, the union officially became nobody’s business. She will not be the first in this scenario and will not be the last.” 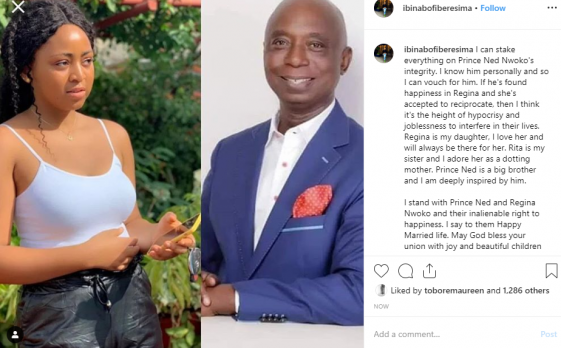 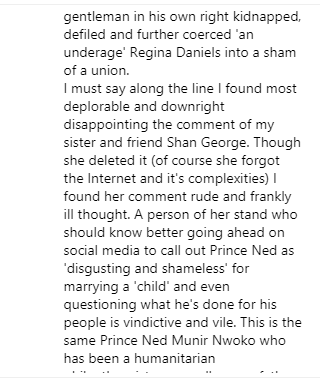 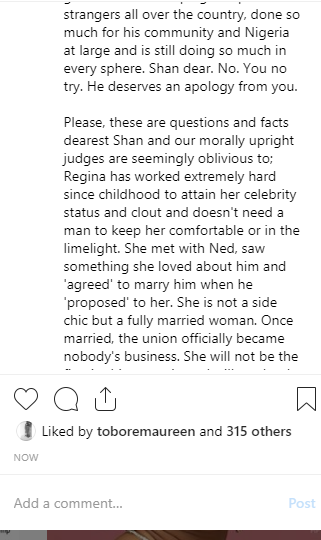