Home National News “It is easy to see and discern who the real villain and...
Facebook
Twitter
WhatsApp 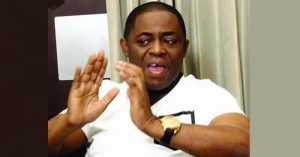 Fani Kayode, a former minister for aviation, has called Babagana Kingibe the real villain of democracy after the latter claimed that former president Olusegun Obasanjo was one of the architects of June 12 annulment.

Fani Kayode who made his view known while fielding questions from journalists in Abuja describe the allegation levied against Obasanjo as a lie from the pit of hell.

“I have immense respect for Ambassador Babagana Kingibe and I congratulate and commend him for the great honor that was bestowed upon him and Chief MKO Abiola by the Buhari administration.

“I also commend President Muhammadu Buhari for doing the right thing and not only making June 12th our authentic Democracy Day but also naming the National Stadium after Abiola.

“We must not allow anyone to indulge in historical revisionism or re-write history. Obasanjo was not a member of General Ibrahim Babangida’s administration and neither did he have any hand in that monstrous perfidy and conspiracy against democracy and the Nigerian people.”

“It is easy to see and discern who the real villain and traitor is between Obasanjo and Kingibe in this matter. One stood for democracy whilst the other joined and collaborated with those that literally killed it”.

“As a matter of fact the man that insisted on the annulment of the June 12th election literally at gunpoint, Gen. Sani Abacha, was the same person that set up Obasanjo in a trumped up coup plot a few years later, jailed him and attempted to murder him with a lethal injection whilst he was in jail.

“The same Abacha was responsible for the murder of Gen. Shehu Musa Yar’adua when he was also falsely accused and jailed for coup-plotting.

“It is the greatest irony of history and fate that the same Kingibe that has made this grievous allegation against Obasanjo and who was a protegee of both Obasanjo and Shehu Musa Yar’adua ended up serving in a Government that was led by the same Sani Abacha who not only insisted on the annulment of Abiola’s mandate but also jailed and was intent on killing them both.

“However the assertion that President Olusegun Obasanjo had any hand in the annulment of the June 12th election is a lie from the pit of hell.