Home National News Just In: Buhari Did Not Approve The Creation Of State And Local...
Facebook
Twitter
WhatsApp 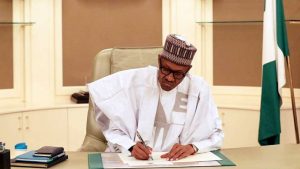 President Muhammadu Buhari’s aide on new media, Tolu Ogunlesi, has come out to debunk the news making the rounds that the Presidency has approved the creation of state and local government police.

According to the aide who spoke via his Twitter handle, he said Buhari only acted on the recommendation of a report which was presented to him by a Panel on SARS during the ceremony which held today.

Fake News. There were no “approvals” given. Ceremony was for submission of Panel Report (more than 2,000 pages long) – which made several recommendations. President received Report & directed IGP, Min of Justice & NHRC to “work out modalities for implementation within 3 months.” https://t.co/nRMVD99Mqg