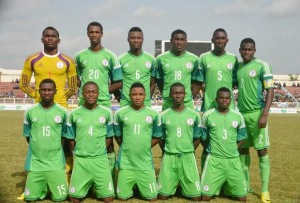 The U20 Flying Eagles of Nigeria have crashed out of the ongoing FIFA World cup tournament holding in Poland after being beaten 2-1 by fellow African team, Senegal in the round of 16.

The match started at a high pace with the Eagles retaining possession until the Senegalese team with Nigeria with their lightning attack and opened the scoring in the first half before going on to double their lead on the half-hour mark.

The North African team were then in the ascendancy as a result of their comfortable lead.

The second half began in a more improved fashion for the Nigerian team and they reduced the deficit from a scrappy freekick in the 50th.

The lone goal only proved to be a consolation as the North African team held on to their lead.