The ongoing social media battle between Nollywood actress, Iyabo Ojo, and journalist, Kemi Olunloyo does not seem to be coming to an end soon.

Iyabo Ojo called out Kemi Ashefon this morning claiming the blogger carried false information about her not being married.

Reacting to this new revelation, controversial Journalist, Kemi Olunloyo took to Instagram to mock the actress.

Also Read: Redeemed Church Pastor slapped by Judge in the middle of service

“Good morning pls people stop tagging me because of your ILLITERACY. The ability to read and write is paramount.
__

Ashefon who I’ve never met personally in case some of you don’t know was the style editor at Punch for years. A professional Journalist who gave celebrities fame for showing us what they wear and we took Kemi’s punch spread to the tailor to copy. She’s now a Celebrity gossip editor, something you all like yet criticize the reporter. Pls pay attention to her report, true or false. Wedding pics doesn’t mean you are married. This is the biggest problem Canada is having now with Nigerian immigrants. Pics and fake documents then smuggled into Canada with the man who already is a naturalized citizen. Iyabo dare not thread my path as her case is active here as Teni says.
__

For your case, the bigger picture is that Iyabo is no longer married to her carpenter, she’s busy destroying lives of pastor’s, ministers and traditional rulers and even colleagues wives roping anyone including journalists in her web of lies. After Ibiyeomie’s wife told me to forgive her, I did a video, she says she doesn’t need my forgiveness. What she didn’t realize is that she refused God’s forgiveness and he’s coming to wrap her in his arms soon. “Always focus on the bigger picture”~~Dr @kemiolunloyo©2007 #KOOQuotes. I don’t know anyone who posts MARRIAGE certificates or wedding photos of their failed marriage ONLINE. SMH #kemiolunloyo
#Drkemi
#kemitalkscelebrities 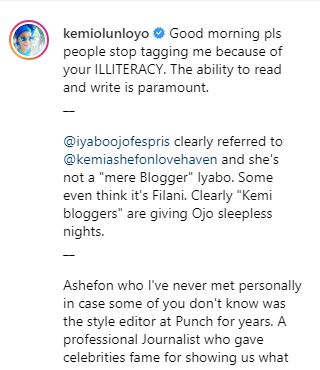 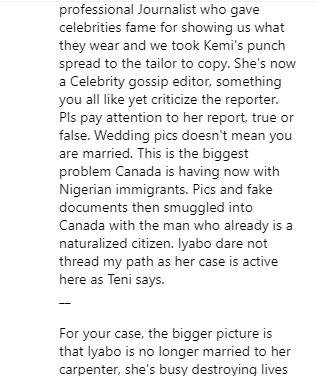 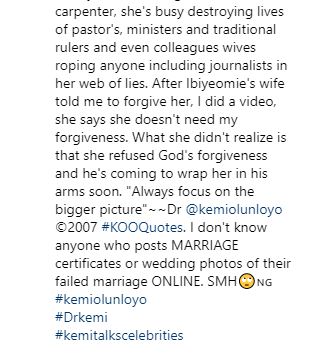