A 22-year-old man identified as Joseph Ogbu has been apprehended by the Lagos state police command for allegedly assassinating his 38-year-old employer, Oreoluewa John and her 89-year-old mother at their home in Lagos. 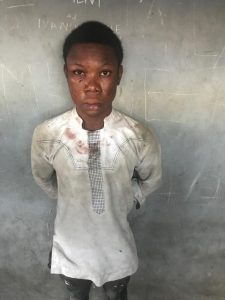 The news was confirmed by the command’s Public Relations Officer, Bala Elkana who released a statement which states that,

” at about 3am today, the Surulere Police Station received a distress call from No 4 Ogulana drive in Surulere that Joseph who is from Oju Local Government Area, Benue State and who was employed as a domestic staff on 18th June, 2019, murdered his employer Oreoluwa and her 89 years old Mother at their home”.

The suspect confessed to being guilty of the crime as he disclosed in his statement that his boss requested that he clean the house around 9pm on the 19th June, 2019. However, they got into a heated argument which provoked him to stabbing her with a knife. Speaking on her mother’s death, he said she collapsed and died due to the shock of the incident.

Things took a turn for the worse when he realized that they were both lifeless. He carted away some of their possessions like their electronics, handsets and household items into the employer’s Toyota Camry Salon Car in order to flee the scene. However, he ran out of luck as he was caught and arrested by Policemen on patrol at Ogunlana pin-down point. The vehicle and items taken were retrieved.

The corpses of the victims has been moved to Mainland hospital, Yaba for a postmortem examination and the crime scene has been closed off.

The Commissioner of Police Lagos State, CP Zubairu Muazu mni has instructed that the case should be handed over to the State Criminal Investigation Department, Yaba and the suspect should be charged to court.

See photo of the suspect below; 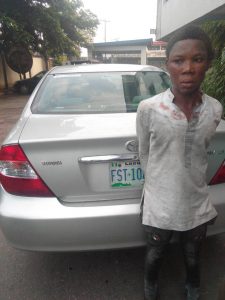