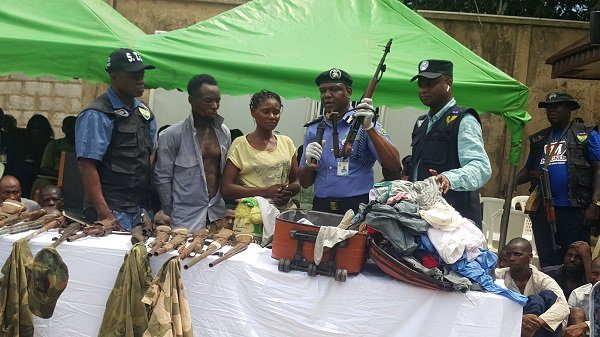 The Ogun state police command has arrested a nursing mother for being in possession of one AK 47 rifle and 18 live ammunition.

According to the woman who was paraded at the force headquarters, Abuja, alongside other criminals, she said she wasn’t aware of the content of the bag. She added that her husband of almost 2 years asked her to deliver the bag to someone in Ogun state before she was apprehended by the security operatives who conducted a search operation while she was on the bus.

“On Wednesday, my husband (Bright Gbade) called me and asked me to go and deliver the bag to somebody in Ogun State. He did not even tell me the name of the person, he only told me that the person will call me.
“I did not know the content of the bag and they did not even allow me to carry the bag. They carried the bag themselves to the motor park. It was while we were on our way that the policemen searched the bag and found the gun in it.
“We have been married for two years and I did not know that my husband is a criminal. My husband said he is a fisherman when he was asking me out and before I accepted his proposal, he said he was one of the militants who surrendered their weapons during the amnesty program.
“I even relocated to my mother’s house because of the way he treats me. I was at my mother’s house when he called me to help him deliver the bag in Ogun State and he promised to give me N5000 but he ended up not giving me.”