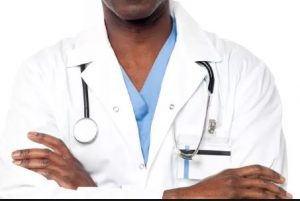 The Yola state Department of State Services has paraded a fake doctor, Ibrahim Mustapha, for allegedly killing patients during the course of his fake practice.

According to the DSS director in the state, Bola Olori, who spoke with journalists shortly after the arrest, she said:

“The DSS effected the arrest of one Ibrahim Mustapha, who operated illegally as a PMO in Fufore Cottage hospital, Fufore local government area of Adamawa state”.

However, the fake doctor who spoke with journalists shortly he was arrested argued he has performed over 500 surgical operations and none of his patients died.

Yes, I’ve forged the documents as stated by the DSS boss and also done both major and minor surgical operations, including caesarian section, altogether more than 500 surgeries without causing the death of any of my patients as claimed.”

Bola Olori further shared how the fake surgeon started his practice as stated below:

“He perfected the illicit act in Gombe where he worked as a ward attendant in several clinics. He was aided by a practising doctor who gave him sample copies of his NECO results, MBBS of Bayero University Kano, NYSC Discharge certificate and Medical and Dental Council if Nigeria, annual registration license.”