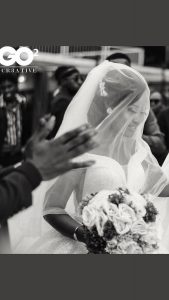 The song is expected to be the new wedding song/anthem as soon as possible as a result of the rich vocal and vibes by the duo.

The music video which used a wedding theme has the Tv reality start as the lead female act and it was produced by SperoachBeatz under DMW record label.

The ”Amaka” crooner gave Nigerians something to think about during his collaboration with Tubaba and we are hopeful this won’t be any different.