Recall news surfaced that the singer was still locked up despite having been granted bail due to his inability to provide people who would stand for him.

Last week, Marley was granted bail to the tune of N2million plus two sureties but has remained in custody since then and news surfaced a few hours ago that he remains in custody

News filtered this morning that the reason why Naira Marley hasn’t been released is that nobody wants to stand as surety for him due to his past records of crime. The sureties required to bail him areas there is no one on Level 10 to stand as a surety.

The singer has now slammed the claim.
Read his post below; 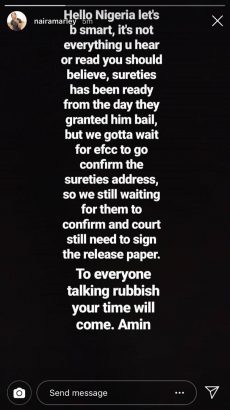