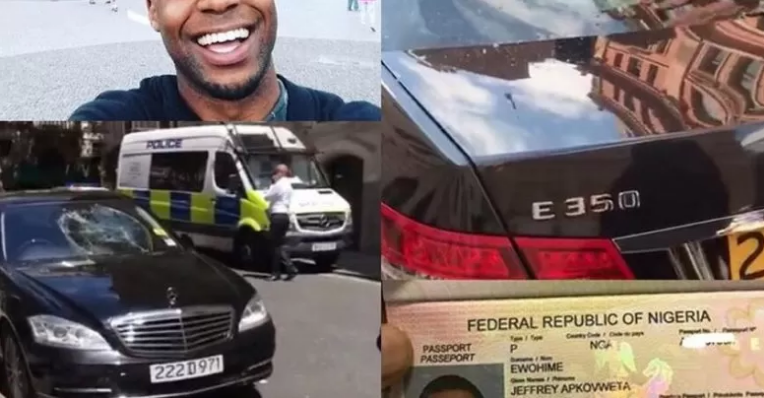 A Nigerian man by the name Jeffery Apkovweta Ewohime, who destroyed 5 embassy cars in London has been arrested.

According to reports, the 32-year-old decided to create problems at the embassy after his passport was confiscated and turned back for arriving late.

Upset by the treatment received, he decided to use stones and rocks to damage the vehicles parked at the embassy’s premises.

He said Ewohime had arrived late at the Nigerian mission in London for his passport “and was told by the Security that the Mission has closed for the day. He went about destroying Nigeria’s diplomatic vehicles worth hundreds of thousands of taxpayers money. The passport in question has been issued since 6th of June 2019. He did not leave any self-addressed envelope for delivery.”

Abike Dabiri, the Senior social assistant to the president on foreign affairs, corroborated Babandede’s statement saying his behaviour is “unpatriotic, and an unconscionable act of indiscipline.”

Recounting what happened, Abike said the man had arrived late to collect his passport and was told he would not be able to get it. When he insisted on getting it, he was told to bring his collection slip which he couldn’t produce and the embassy could not give him the passport without the slip.

Angered by this, he destroyed seven cars, five belonging to the embassy and two to visitors.