In the spirit of trending online, N6 has taken his colleague’s side. Recall, Peruzzi was accused of slapping and assaulting a popular social media influencer, Pamilerin Adegoke. Even though, a large number of people were against Peruzzi’s action, N6 decided to have his brother’s back by supporting him.

He shared a picture on his Instagram page defending Peruzzi with the caption:

“#AwonCloutChasers 🤣 #AwonKeyboardGangsters#DontStartNoneWontBeNone Nigerians need to Learn that you do Not Come For another Human Being then Dictate how they React #TalkShitGetBanged I don’t support Violence but KEEP UP THAT KEYBOARD ENERGY IN REAL LIFE IS ALL IM SAYING… Not all of Us are Built To Ignore.” 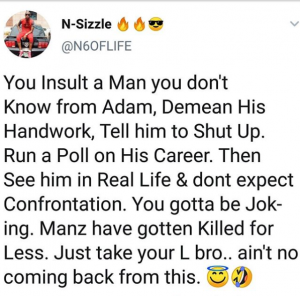 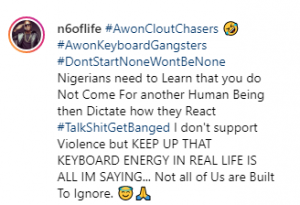