Nigerian Foremost Author and Nobel laureate, Prof. Wole Soyinka has made a statement concerning the whole saga about a boy who ordered him out of his allotted seat on the aircraft. 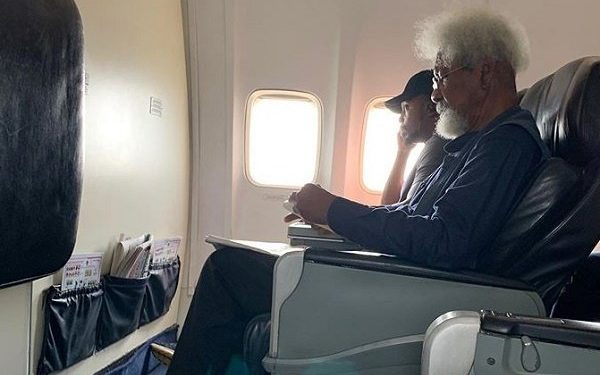 The topic which was revealed by Business Mogul, Tonye Cole on his Instagram page explained that a young boy ordered the Nobel laureate from his seat, this caused a heated debate on social media as a lot of people had something to say about it.

It was later discovered that Prof. Wole Soyinka sent a private mail to Media Mogul, Mo Abudu to clear the saga.

The post was later taken down by the Business Tycoon, Tonye Cole

The playwright in an official statement said;

Those who permit themselves to be persuaded, even for one second that I, Wole Soyinka, having wrongly identified a seat number like millions of travellers all the time, and all over the world, would then attempt to consolidate the error in any form, through act, word, or gesture, qualify to be the first beneficiaries of this vastly improved humanitarian policy.’’

don’t know how many airlines succeed in raising for their charity drives through those envelopes they distribute to passengers into which their captive donors are exhorted to deposit their loose change before disembarking. Such monies are then distributed to worthy causes all over the world, especially in the pursuit of health,”

“What I am convinced of is that they would generate a hundred times more if they were more creative. For instance, they could impose a fine on passengers who take the wrong seat on boarding, even for a second. One can only rejoice in the thought of such benefits to humanity in its efforts to eradicate all kinds of diseases, especially malnutrition, and ensure the supply of nutrients that prevent the premature onset of brain impairment.”