Home Politics Number of people who have died under Buhari more than those of...
Facebook
Twitter
WhatsApp 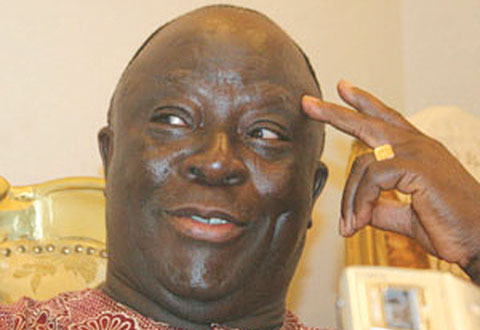 A leader of Afenifere, the Yoruba socio-political organisation, Ayo Adebanjo on Monday said that the number of people killed under President Muhammadu Buhari more than those killed during the civil war.

The ‘number of people that have been killed under him is more than the number killed during the civil war’ and that ‘if Buhari really loves the country and is sincere about keeping the country together, he should restructure the country immediately. All these units in the federation should be autonomous enough to take care of security,’ Adebanjo was quoted saying.

He said this in a recent with Tribune, adding that: ‘I am Ayo Adebanjo. Everybody is entitled to his or her own opinion. What I am saying is that Buhari is the greatest civilian autocrat. Why? I am judging him by his actions. Will a Democrat, in a democratic society, disobey court orders on two, three, four individuals? Will a Democrat, under the rule of law, invade judges’ quarters under the pretence that he wants to wipe out corruption? These are my reasons I don’t just label him. I call him a dictator by his actions and let people tell me that those actions are consistent with democratic principles. That’s all.

Buhari is living in denial; we all know that. The whole world has been telling him that these people have been incompetent for the past four years that he has been there. That is not new; but he turned a blind eye. That is not a new thing at all. Buhari has all along been guilty of negligence in protecting lives and properties. People have been clamouring that these security chiefs, heads of Army, Navy and Air Force, should be changed for lack of performance. He didn’t change them. But now that he has been told that the officers are not committed, what is he doing.

If he is really sincere about protecting lives and properties? He should sack them and put competent officers there and then, if he fails to do what is right to be done, then, he has no moral right to be in office. He is the Commander-in-Chief; he should appoint those who should do that. Now that officers are no longer committed, he should change them. If you had employed an officer who is not doing your job, you sack him and employ another officer; your inability to do that shows that you are also not competent.

Can you do economy under the state of insecurity in the country? Which investor would come when people in a small village cannot safely go to the farm and grow their produce and when people can’t move from one state to the other without the fear of being kidnapped? When people can’t move safely without armed robbers attacking them? When people can’t live in their villages without Fulani herdsmen raping their wives? These are issues in the country which he (Buhari) has not even said a word about on Democracy Day. We don’t know what Nigerians have done to make us deserve a man like Buhari. The number of people that have been killed under him is more than the number killed during the civil war and yet, the man still has the effrontery to be telling us the security is alright.

On restructuring, he said:

No other solution than we restructure this country. I am one of those who believe that if we keep on talking about development, we are just deceiving ourselves. Now, the police, the Army and everybody is now saying you should have state police to counterinsurgency. State police are one of the ingredients of the federal system.

Unfortunately, some of the well-known and your knowledgeable governors in the All Progressives Congress (APC) in the South are now saying we have not all agreed because some people cannot afford it. I am ashamed of the governor who said it because I know he is knowledgeable enough to know that the question of state police is not a question of financial viability. It is a sine qua non of federalism which we are clamouring for. And there is nothing like restructuring other than that.

Under the restructuring, you have your own autonomy. You rule yourself. And when you are talking of financial viability, the moment you bring in the state police, all the votes the Federal Government has been using for the police would devolve to the states. You don’t need a crystal ball to know that, and for a knowledgeable governor to be telling Nigerians of our own age that, with all the professors and legal luminaries that you have around, it is a shame. It is not a question of anybody doing us a favour. If this country wants to stay together, we must stay together under a constitution that is acceptable to everybody and that constitution that is acceptable to us has been decided at independence by the founding fathers. It was the military that de-structured Nigeria; that is why we are in this trouble.

That is why we say restructure the country; go back to where you met us and all these problems would not be there. It is the excess money in the hands of the Federal Government that makes it easy for it to spend money where it is not necessary. This thing is simple.

They are just making mountain out of a molehill.