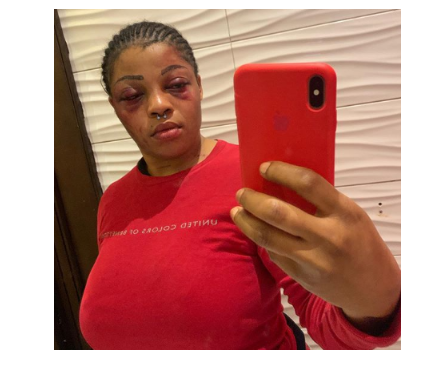 A Nigerian lady has taken to social media to share photos and a video of her battered face gotten from trying to leave her abusive boyfriend.

Posting the photos she wrote;

”Let me put it straight.. I think most of u don’t understand me, I wasn’t beaten up by any girl, and Perhaps no girl can ever punch my eyes this way and won’t go to her early grave. I posted some days ago that I was done with a nigga I was kissing, that his gf should come get him, which later he bought icecream and apologized to me, gave me good head and we had a nice fuck, but he feel Inlove with a bad bitch, I told him let me spoil u, but I don’t do love, unfortunately he feel In love with the cruise I gave him, and nigga refused me to go have fun and he got addicted to me, when I finally made up my mind to go, he beat me up for breaking his heart,, like the fuck.. Y’all know am a badbitch, I don’t love, I only make u go crazy, put u on some estacy shit and fuck the hell outta u,, and I go, This nigga beat me up and took me to the police to sign.. with my two eyes closed with blood..like I don’t get.. is it by force to love? I didn’t even know what I signed for, maybe not to come after him for beating me.. but hey .. I was beaten because Pussy too sweet that ur man wanted to keep me, but am a shameless hoe. I gave him cruise, he feel in love with it, now I gotta have a swollen eyes for having a sweet pussy??. 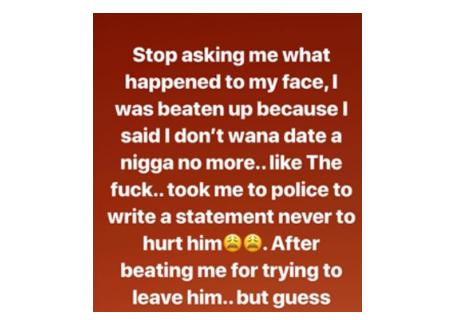 Lady seriously beaten up by her boyfriend for attempting to leave him, drags her to the police station to sign an undertaking never to leave him.