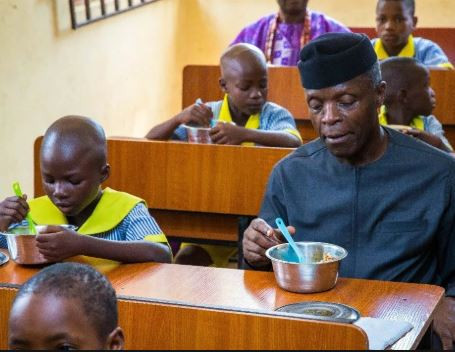 Special Adviser to the President on Social Investments, Maryam Uwais, has revealed the reason the Homegrown School Feeding Programme of the Federal Government was suspended in some states.

Recall there were reports of poor quality food, been served as well as an insufficient and irregular supply of food in states, such as Akwa Ibom and Niger.

Reacting to the development, Uwais said;

“We have been reconciling the data in the states after engaging the NBS to conduct a headcount of pupils and cooks for us. Essentially, we found conflicting reports of the figures between official SUBEB figures and reports from monitors in the field.

“We mobilised the NBS to venture into all government-owned primary schools where we are feeding to confirm the numbers and those actually feeding. So yes, we haven’t fed the pupils since April due to reconciliation efforts, as some of the states are contesting the figures. We (will) start feeding on June 24 for the states that have been feeding, irrespective of their protests. That is the cut-off-date for all protests.”

She added that; “Nigeria is fast on its way to becoming the leader in Africa by feeding over 9.7 million pupils and still counting.”  To implement the programme, she said the government required 94 metric tons of fish, 7,260,862 eggs and 767 cattle slaughtered for the pupils being fed.  She added that fruits, vegetables and grains were part of the carefully thought-out balanced diet for all of the pupils.