A young boy has been placed in police custody after he was noticed to have been maltreated by his father and stepmother, a Twitter user confirms. 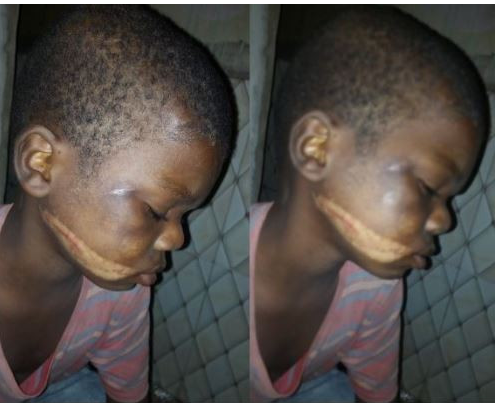 The young boy who said his mother is late was under the care of his father and stepmother, according to the story shared on Twitter, the boy claimed his father used a knife he placed on the fire to mark a brutal scar on his jaw because he stole meat from the pot.

The Twitter user who noticed the boy is in distress shared the meeting she had with the boy, as the boy confesses he is being maltreated by his father because his mother is late.

The Twitter user, identified as @ryann_agada has reported the case to the police station as she calls for Nigerians to come to the aid of the young boy

That lives in my area. He said they're going to arrest the dad.
His mum is late.
This little boy needs help
He is currently at uwanse police station in Calabar.@humanrights1st @renoomokri @HitFMCalabar @MobilePunch @CalabarBlog @crossriverwatch