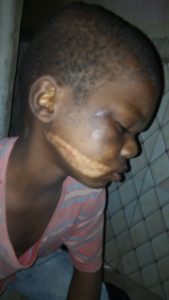 A Twitter user @ryann_agada has shared the story of a young boy who was maltreated by his dad and step mum in Calabar.

According to the narrator of the story, the boy reportedly got the scar on his jaw after his father pressed a hot knife on him for stealing meat from the pot.

I have been seeing this little boy for a couple of days, but I thought he was just one random kid that stays around. But he caught my attention yesterday when I saw him standing close to a flower in front of my house… He was acting as if he was hiding from someone

I called him and asked what he was doing there. He said nothing. I told him to leave that place and go home, he said he couldn’t. I asked why, and he told me his story… That his dad is married to another woman, she maltreats him, she doesn’t give him food. That his dad

I went out and came back around 11 pm to see this little child sleeping in front of one closed shop, Outside. It was drizzling and everywhere was cold. I woke him up and asked why he hasn’t gone home. In his words ” my father pursue me from the house because of my auntie break

Television come talk say na me”. (I’m trying to post the video but it’s not loading I don’t know why) I couldn’t leave him outside so I told him to sleep in my corridor. I gave him a wrapper to cover himself. I was even scared. So this morning I took him to one policeman that lives in my area. He said they’re going to arrest the dad. His mum is late and this little boy needs help.

He is currently at the uwanse police station in Calabar.