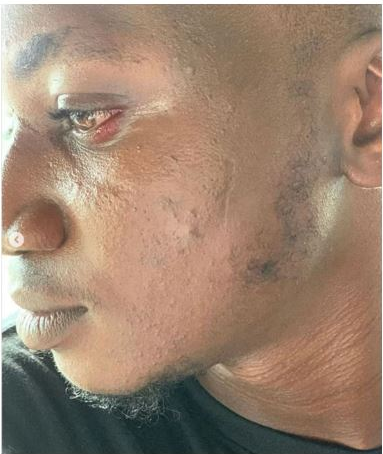 After the event it was time to go back to Lagos and face traffic, I got into the bus that was taking us to PortHarcourt from Bayelsa, next thing I heard was, come down here, then I felt heavy hand pull me down.

All I could hear was, are you AYE(cult), I could not respond because I was lost in thought. What is happening I said to myself. Then this guy dragged me where Peruzzi was standing. Ohh, it’s you, I said to myself.

Next thing, your super star Peruzzi pulled me up with the help of his bouncer holding my hands, the next thing I heard was boom. Is that from THOR I said to myself. He started screaming, don’t you ever tweet about me again, you are mad, who do you think you are.

This continued to about 20 minutes, everyone around was shocked and dumbfounded, he said how on earth will I compare him with Teni ????He said he does not care, but this is you abusing me after 6 months.

Bearing in mind that I tweeted on the 6th January, 2019. When the whole comparison between himself and Teni surfaced online. I simply asked our gentleman not to compare himself that Teni has put in lot of work, so she deserved to be given her moment and credit. 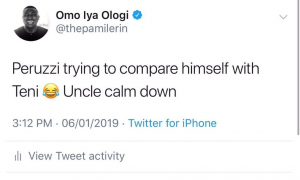 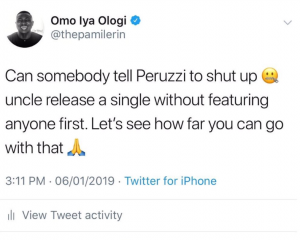 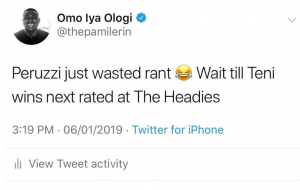 The artist has however been blasted on Twitter for assaulting and slapping thePamilerin, some have also used the drama to create memes n twitter.

The reason Peruzzi slapped and not punched Pamilerin is because he can never blow. Think about it!

Peruzzi always need a feature to get a hit.

His Bodyguards had to hold Pamilerin down before he could slap Pam Pam over a January tweet where he said Teni is better (ATTACHED).

Peruzzi's hand is gonna really hurt from all the slaps he's gonna give millions of Nigerians today pic.twitter.com/9Rj08Gm4qI