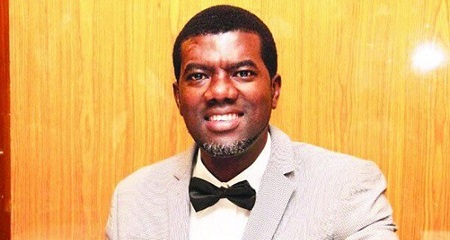 President of the Omega Fire Ministries, Apostle Johnson Suleiman has urged Reno Omokri to stop responding to allegations that he converted the #FreeLeahSharibu campaign for his personal gains.

Since the reports of accusations broke, Omokri has dedicated most of his post on Twitter, to refuting the claims and asking his accusers to come up with evidence(s).

The cleric in a tweet on Sunday urged the former presidential aide to stop responding to naysayers and people who’re opinions have no value on their family meetings.

He tweeted: Pls @renoomokri stop responding to cynics, naysayers, and folks who have no stake in their extended families. People whose opinions aren’t valued in their family meetings should not be an issue to you..haters are on self destruct. Pls, move on.

In obedience to the word God has spoken through you, I will NO LONGER respond to the lies from General @MBuhari’s agents. I value the word of counsel from a genuine minister of the Most High.