Home National News ”Tinubu Is Fake And Only Fighting For His Own Interest” – Afenifere...
Facebook
Twitter
WhatsApp 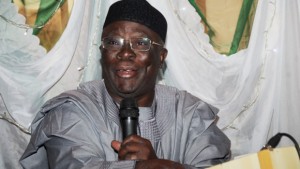 Pa Ayo Adebanjo, the leader of the Afenifere Yoruba movement has come out to slam Asiwaju Bola Ahmed Tinubu.

According to the elder statesman whose comment came in reaction to the visit of Tinubu to Buhari, he said the APC national leader is only fighting for his personal interest and not for the masses or Yorubas.

“How many times will we continue to tell you these people are not Afenifere? They are just fake. Nigerians know who the true Afenifere is. They are just leaders of APC in South-West. When last did they come out as Afenifere except when they want to go and deceive Buhari? They never said anything about killings by Fulani herdsmen, instead, they are talking about true federalism.
“Is Buhari sincere about restructuring? Is that not the basis on which Tinubu was elected as governor? They are just deceiving themselves. I don’t want to waste my time on them again because they are just jokers. You don’t have to lay claim to Afenifere. Nigerians know the real Afenifere.
“They were with us before they chickened out. Now that you have left, why are you still laying claim to that name? A cause we have been fighting before, you abandoned it because you want to be president. They are fighting the cause of the Yoruba for their own interests. It is clear that they don’t have the interest of the Yoruba at heart”.