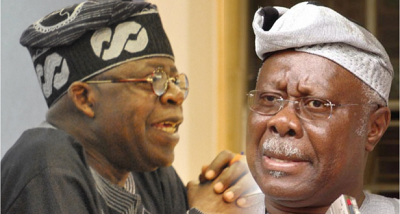 A Former Peoples Democratic Party(PDP) National Deputy Chairman, Bode George, has corroborated Kola Abiola’s claim that the National leader of the ruling All Progressive Congress, Bola Ahmed Tinubu, was not a true fighter of democracy as portrayed in some quarters.

Bode George who made his view known while fielding questions from journalists added that Tinubu went to the presidential villa after the annulment of the June 12 election to lobby Abacha for a commissioner position in Lagos at the time.

“It is true that Tinubu went to beg for a commissioner position. He was in the Villa and Gen. Oladipo Diya is a witness. He (Tinubu) said he wanted to be a deputy to a military administrator and when all that didn’t work, he went into his activism.”

“Most of what Kola said is true. He spoke from the heart and he was trying to set the records straight in the face of the many narratives. He had been looking for who would help to recognize the June 12 saga so that his father wouldn’t have died in vain.
“In the course of this, he had bottled up so much. He went through a lot, having lost his mother and family businesses during the struggle. So, he was setting the records straight so that people would not rewrite history.”