Nollywood actress, Adunni Ade hosted a birthday dinner to celebrate her new age and while saying a heartfelt prayer for her, her first son broke down in tears. 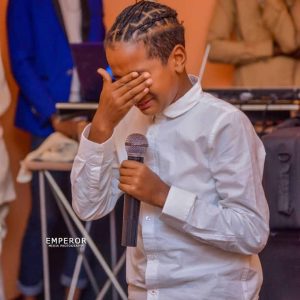 The video of this emotional moment has touched the hearts of many Nigerians on social media.

The actress and beautiful mother of two clocked a year older on June 7, 2019 and she sent her fans and followers into a frenzy as she released a couple of stunning photos of herself on her Instagram page to mark the occasion.

Her birthday dinner that was mainly attended by close friends and family members.

The highlight of the event was when her son took the microphone to say a prayer for her. He showered her with praises but couldn’t hold back his tears as he prayed for her.

Watch the emotional moment below;

Watch the moment actor, Adunni Ade's son said a heartfelt prayer for her at her birthday dinner . #soadorable #motherhoodisbliss