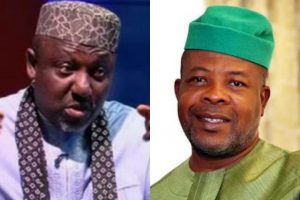 The ongoing melee between Imo state governor, Emeka Ijedioha, and his predecessor, Rochas Okorocha, took another turn yesterday as policemen stormed the shop of Okrocha’s daughter to cart away her goods.

In the video, Mr. Jasper Ndubuaku, the chairman of Imo State Task Force on Recovery of Government Assets, was seen leading uniform men to the shopping complex which is being owned by the daughter of Rochas Okorocha, the former governor of the state.