It all began when singer and entertainer, Teni Makanaki bagged the award for Soundcity MVP ‘Best New Act’. Peruzzi who was also nominated for the award wasn’t pleased with the decision so the pop act took to Twitter to rant saying he had a better year and made more money than Teni.

Mind you, his last solo single/music video was ‘Mata’ which was released in March, 2018. Social media influencer, Pamilerin decided to ginger an online conversation on the 6th of January, 2019 after noticing Peruzzi’s tweet. In his opinion, Teni was far more deserving of the award than Peruzzi. 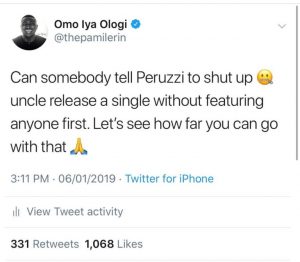 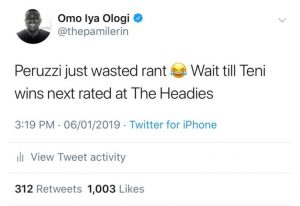 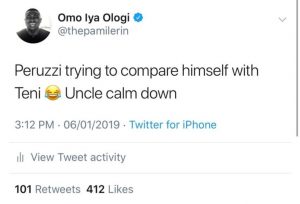 Moving on to June, 2019, it seems the DMW act is still sulking over his loss as he took it out on Pamilerin at an international air port in Port-Harcourt.

According to multiple sources, Peruzzi told his security to hold Pamilerin while he repeatedly slapped and assaulted him.

The video was shared by an Instagram user identified as by vinavina01. According to her,

“Today I saw the worst form of human Stupidity and yes I said Stupidity because there isn’t any way to describe the events of today
So @peruzzi_vibes Assaulted @thepamilerin in the worst manner. His bouncers held @thepamilerin while he slapped him for something as stupid as a tweet he posted in January 😳😳😳😳😳
Like guys, where did we loose our way? Who gave an artist the right to assault a fellow individual over an opinion that was aired? You call yourself a leader to the younger generation and is this what you preach? And Using threatening words like “i’ll kill you”…..”I’ll destroy you”
😳😳😳🤦‍♀️🤦‍♀️🤦‍♀️🤦‍♀️🙅‍♂️🙅‍♀️
I am really pained by this act. What happened to conversations? And peaceful resolve? If we all went around slapping, assaulting and beating up individuals that say/write things about us, won’t we be a country of Barbarians?????????? It’s at points like this the saying ‘THE PEN IS MIGHTIER THAN THE SWORD’
I call on every media outlet to say no to violence, Celebrity Status doesn’t Give you a GOD COMPLEX!
He deserves to be called to order and made to face the arm of the law. A crime is a crime and no one is above the law”