Pregnant Nigerian musician and dancer, Anita Korra Obidi stunned judges at the ‘So You Think You Can Dance audition’ on Monday, June 10, 2019, with her performance especially when she showed up heavily pregnant. 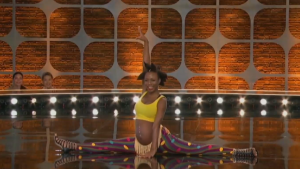 The belly dancer who was born a princess from Oshimili North of Delta state explained to the judges she was going to have a duet audition with her unborn daughter. Although, the judges termed the performance a ‘risky one’, she made the highlights of the audition alongside a graceful couple leaving the audience and judges stunned.

One of the judges, Mary Murphy who was amazed by her performance told her,

“Korra, you are definitely one fierce woman, let me tell ya. I can’t wait to see the playback, because I still can’t believe that you can do that,”

Judge Dominic Sandoval also stated that she was blown away. In her words;

“You gotta give respect to her. She just did a drop-split and then saved her baby’s life at the same time! … I’ve also never seen a baby pre-birth do choreography, I’m blown away. I applaud everything you’re about. Congratulations.”

“You are a world-changer, a systems-breaker. There is so much purpose in your choices,” raved . “I mean, I couldn’t even think of being pregnant and dancing!”

“You are inspiring to women. Just because you’re having a baby doesn’t mean you should stop doing what you love. And that’s wonderful.

Sadly, Korra Obidi wasn’t given the opportunity to get to the next round due to her being pregnant and the fact that she would not be able to participate in any of the activity in the academy. she was however undefeated as she said;

“Performing on that stage was miraculous, and I’m happy that I got to experience it with her (her baby)”.