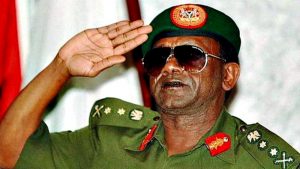 Nigerians have taken to their Twitter handle to react to the now-viral news that another Abacha fund valued at 211 Million Pounds has been recovered in Channels Island 20 years after his demise.

Abacha was Nigeria’s military president from 1993 till 1998 when he died while planning to transit into a democratic leader. Former President Olusegun Obasanjo took over after an election was conducted in 1999.

Some sections of Nigerians while expressing their view to the news have pointed out that the said fund would still be embezzled by the current crop of politicians while others are surprised that funds are still being recovered after 20 years of his demise.

Nigerian politicians looking at the Abacha loot and plotting how to reloot it.

#Abacha meant well for our country country. he opened numerous savings account for us knowing fully well that we will need it in the future. Rest well sir. Your legacy lives on. pic.twitter.com/3DPbLdGbxG