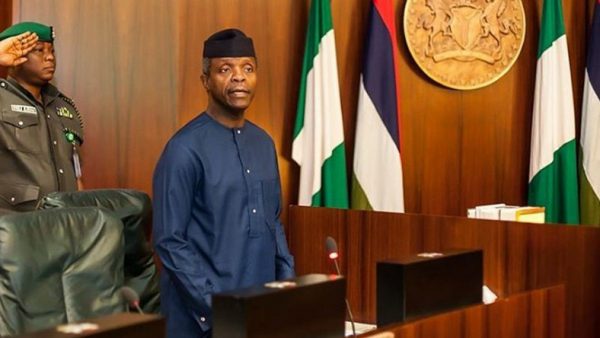 Vice President Yemi Osinbajo has stated where the country is heading in the next 10 years. According to the professor of Law who made this revelation during dinner and interactive session with some visiting faculty members from Havard HBS he stated that part of the agenda of the current administration is to see Nigeria become an industrialized nation in the next decade.

What he said in full;

The Federal Government’s vision for Nigeria in the next 10 years and more is to transform the economy into an industrialized one with a strong middle class and a place where the majority of the people are living above the poverty line,

“According to the Vice President, “I will like to see Nigeria become an industrialized nation in the next 10 years; with a very strong middle class and most people living above the poverty line. Our policies and programs are directed at achieving this objective.”

He said the Federal Government had put in place measures that will kick-start the industrialization drive of the country, citing the example of the creation of Special Economic Zones (SEZ) & small manufacturing clusters across the country as some of the steps taken by the government.

“Practically everything we are doing is to ensure that there is a conducive environment for businesses to thrive.”

The Federal Government is looking at natural economic clusters. We have done a lot of work in five of them, we are looking at 23 others, and we have already set up shared facilities in designated locations to address some of the concerns in production.”

“What we plan for the Special Economic Zones is also unique and geared towards that drive to industrialize our economy.”