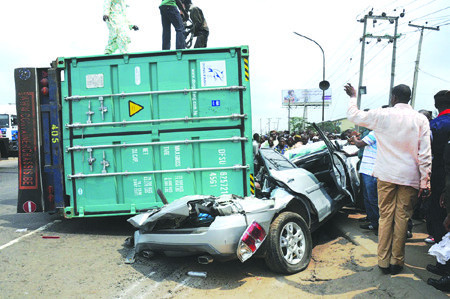 An accident which occurred on Tuesday at Akinhale village, Ewekoro, on the Lagos-Abeokuta Expressway, Ogun State has sent three persons to their early grave.

It was gathered that two persons were equally injured in the fatal accident.

The accident happened after an Iveco truck saw the driver losing control of the wheels, causing the detachment of the container.

ALSO READ: Woman Had Her Breasts Removed After Doctors Wrongly Diagnosed Her With Breast Cancer

A spokesman for the Traffic Compliance and Enforcement Agency, Babatunde Akinbiyi, confirming the incident, said the corpses have been deposited at Ifo General Hospital’s mortuary, while the two injured victims have been taken to the hospital for treatment.