Big Brother Naija 2019 has taken a new twist as the organizers have decided to put Seyi and Tacha on Fake eviction, unknown to the remaining housemates. 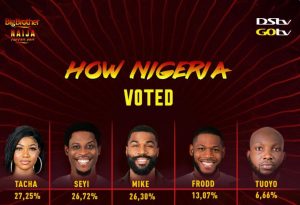 ALSO READ: Mercy Aigbe’s Estranged Husband, Lanre Gentry Reveals They Are Back Together

Seyi and Tacha who had high votes were isolated into another room called the ‘secret room’ and have access to watch other housemates from there.

Big brother has, however, not disclosed the reason behind the fake eviction but revealed they will be back in the house.

Tuoyo who had the least vote 6.66% was the 5th housemate to be evicted from the house.

He had the least vote followed by Frodd, Mike, Seyi, Tacha in ascending order.

See the results below;