Former Nollywood actress, and Barbie, Cossy Ojiakor is not in the mood to allow sleeping dog lay as she has called out at journalist Tunde Moshood, again.

The controversial personality has been in the news for the past few days, after calling out former best friend, Halima Abubakar and Tunde Moshood over their roles in her dog sex tape scandal.

Tunde Moshood has responded in kind by releasing the video, after he alleged that the actress dragged his daughter into the conversation.

Cossy Ojiakor who is not in the mood for play has called out the journalist again in the alleged fall of Lucky Ewa, the producer of ‘Itohan’, a film dedicated to enlightening the public about child trafficking. 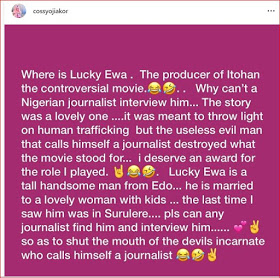