The People’s Democratic Party (PDP) presidential candidate during the 2019 general election, Alhaji Atiku Abubakar, has reacted to Seyi Makinde’s asset declaration, which revealed that the Governor has assets worth over 48 billion Naira.

Mr. Atiku, in his reaction to Mr. Makinde’s assets declaration, described him as “the trailblazing PDP governor.”

Atiku, who took to his Twitter page on Tuesday to react to the declaration, said the declaration was a testament to integrity and accountability worthy of emulation.

@seyiamakinde, the trailblazing PDP governor of Oyo State’s feat in publicly declaring his assets is a testament to integrity and accountability worthy of emulation. 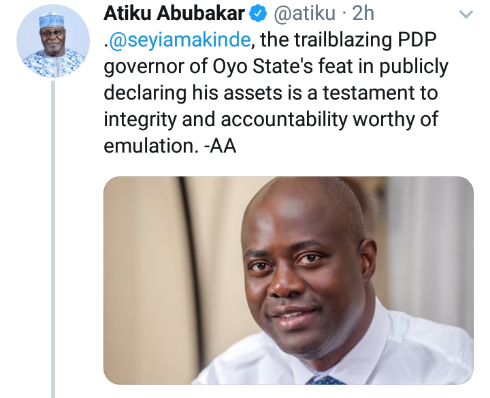