Ex-Big Brother Naija ‘Double Wahala’ housemate, Cynthia Nwadiora, popularly known as Cee-C, who became very controversial back in the house because of her attitude towards her fellow housemate, Tobi, has publicly shown her support for on-going Big Brother Naija PepperDem housemate, Diane.

The reality star shared a post on her Insta-story, commending Diane for speaking against Tacha.

It seems most of the housemates are out to get Tacha at every slightest opportunity. 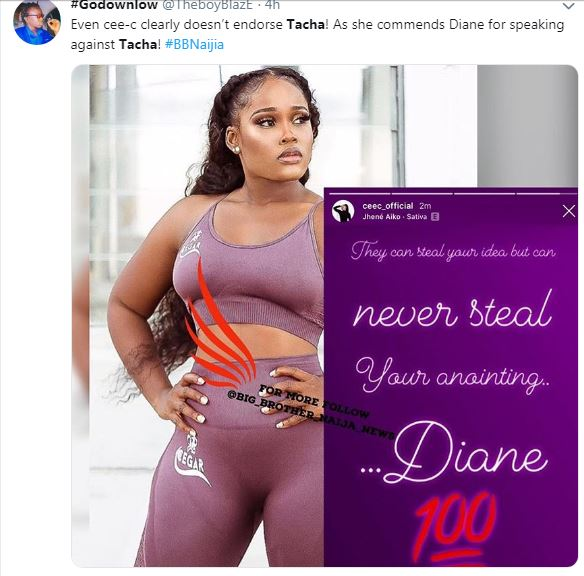 Recently, Nelson asked Diane a question which many tagged as a sign of jealousy.

Nelson asked her the number of guys she has kissed since she came into the house.

Diane, however, brushed off the question, telling him to close the chapter.

Meanwhile, something seems to be brewing between Tuoyo and Diane.

Tuoyo requested for a flower for Diane after his Diary Session on Monday night, July 8, 2019.

The love triangle is becoming complicated in the house.ECLA