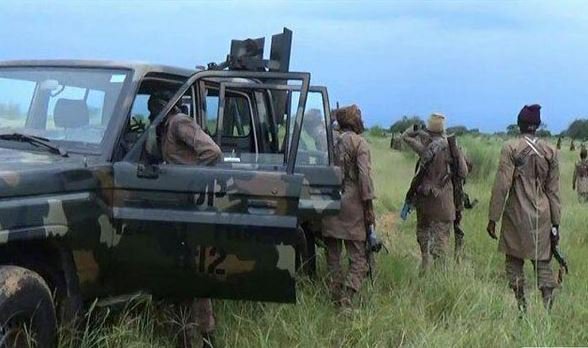 A new report has confirmed that 5 soldiers to include a captain and his four escorts, his driver as well as a colonel have been killed by rampaging Boko Haram insurgents between Mainok and Jakana along Damaturu/Maiduguri highway.

TheNation reports that the Colonel and his convoy ran into some fleeing insurgents and then got into hours of heavy gunfire exchange.

A military source who spoke on condition of anonymity said;

ALSO READ: The Biggest Stories Of The Week

He said: “The Colonel with his escort was just unlucky to run into the insurgents on his way from Maiduguri to Damaturu without knowledge of the ongoing attack on the highway”.

The source also confirmed that the Colonel is from 29 Task Force Brigade of Sector II of Operation Lafiya Dole.  The source also informed the insurgents were dealt a heavy blow as one of their gun trucks was burnt and several of them killed.  Another source informed that two civilians were killed in the Jakana attack from stray bullets.

A spokesman for the Nigeria Army Sector-II, Lt. Njoka Irabor said: “The information available to me is still sketchy. I honestly don’t have any details now but I will get back to you as soon as possible”.